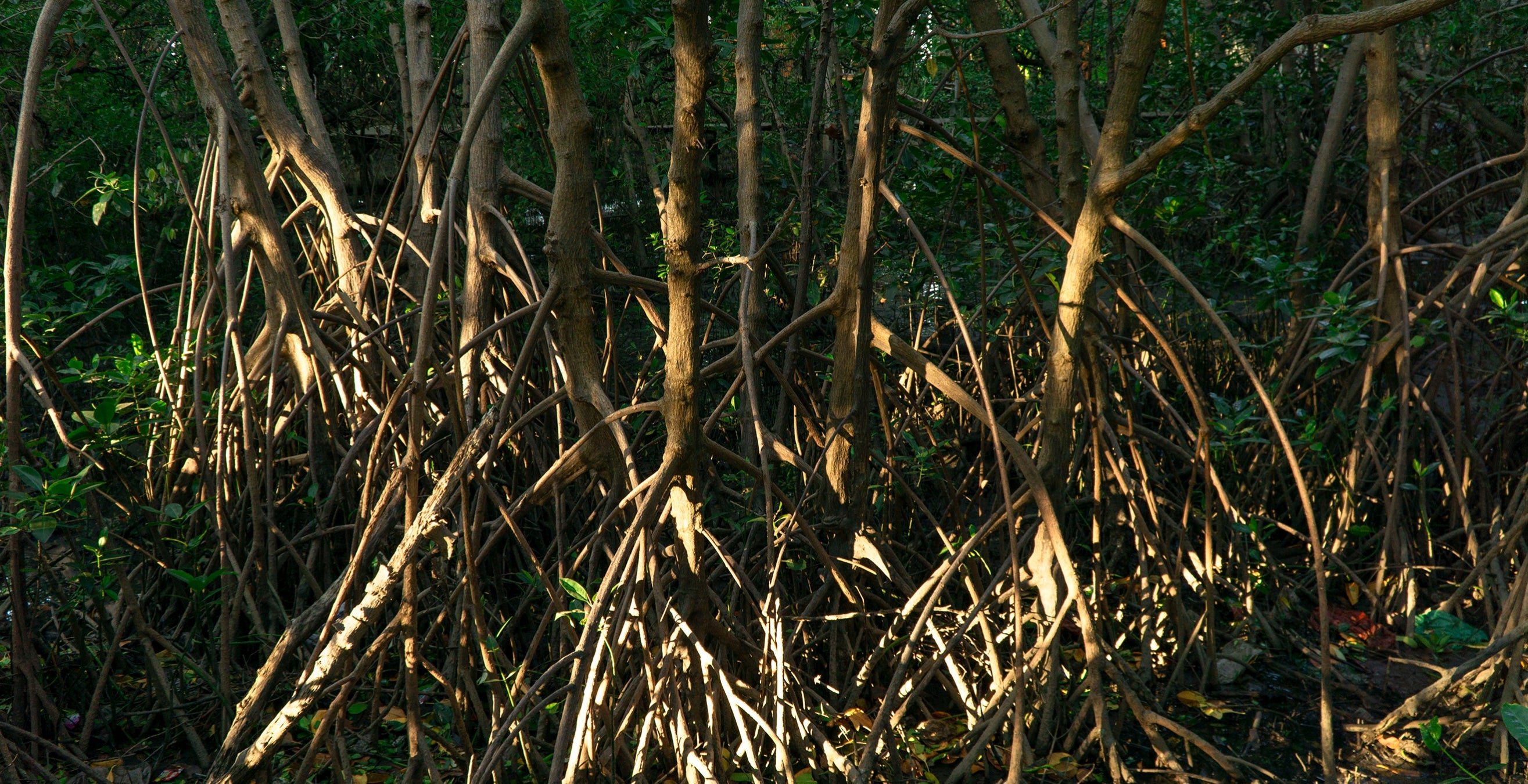 The day is already white hot when Jack Conville leaves the dirt path and wades into a green forest of mangroves. Wearing shin-high rubber boots, he gets to work right away, ripping invasive vines from sprawling tree trunks, chopping up fallen branches, and clearing out shrubs. He endures the chomp of fire ants and is careful of the tall blades of grass, so sharp they cut. Pausing only to wipe sweat from his face, he crouches again and again to shove color-coded wooden stakes into the ground, pinpointing where seedlings will soon be planted.

Many of Conville’s friends are spending their spring breaks in more luxurious settings. But the Pitt finance major didn’t come all the way to Puerto Rico to lounge on the beach. Instead, he is far from the typical tourist trappings. He’s working alongside the island’s residents as part of a course in the University’s College of Business Administration (Pitt Business) that blends economic development with ecology—intellectual endeavors with digs in the dirt.

Conville and his classmates are discovering that to help restore the forest is to nurture an Eden of possibilities that will bloom for years to come.

To reach the mangroves, the Pitt students board a small commuter van in San Juan and ride it south on winding roads out of Puerto Rico’s capital city. They pass folks chatting on porches, open-air fruit stands, and small hamlets of modest homes perched on stilts. Many of the neighborhoods they travel through still bear the scars of Hurricane Maria, whose lashing winds and rising tides devastated the island in 2017. Roofs and windows are still in need of repairs. Electrical outages remain frustratingly common. The storm that killed thousands and crippled infrastructure has led to long-term health and food emergencies. Governmental agencies and nonprofits have struggled to respond to the massive scale of destruction. One of the nonprofits that has stepped up to help storm victims is Caras con Causa, an organization dedicated to social justice in the communities surrounding San Juan. With the initial emergency response now behind them, the nonprofit is helping to rebuild the island by returning focus to the ever important work of supporting schools, grassroots leadership, the local economy, and reforestation. It’s a mission Conville and the others are on the island to aid.

The process that brought them there started years before. In the months before the storm hit, Bryan Schultz, director of international programs for Pitt Business, had embarked on a collaboration with Michael Fernandez, the director of Caras, to create a long-term initiative—one that could open new doors for people in Puerto Rico and at the University of Pittsburgh.

Caras had set its sights on the vital mangrove forest that sits in La Ciénaga Las Cucharillas Natural Reserve outside the capital. The plan was to create an environmental science laboratory there, inviting scientists and researchers from around the globe to study the unique ecosystem. To do so would seed a local development project. With the lab would come teachers, ecologists, local planners, social activists, and students, all en route to ensuring an active community and preserving land for purposes other than upscale housing with an ocean view.

It was a big task, and the nonprofit was looking for help. Business models and cost projections would be needed, for example; a marketing plan would have to be hashed out. Schultz knew that Pitt Business students were primed to pitch in—and that the learning opportunities it presented would be invaluable.

Then Hurricane Maria hit. It temporarily delayed the collaboration, but it didn’t stop Pitt Business’s involvement. If anything, the scale of the hurricane’s damage made engagement feel even more critical.

The coastal forest, surrounded by metropolitan neighborhoods, is one of the world’s few urban wetlands. Its mangroves—with their vast root systems and saltwater tolerance—serve as natural buffers, helping to insulate the island from flooding and hurricane winds. The forest also improves air quality and serves as a breeding ground for plants and animals. When the forest is harmed, its ability to preserve and sustain life is harmed, too. To protect the mangroves is to help protect the island from the next big storm.

In working with Caras on the ambitious laboratory plan, Pitt students would have the opportunity to learn the many ways to make an impact in business beyond the boardroom. Before the Pitt Business students stood in the humid shade of the mangrove trees, they were in Pittsburgh during a cold and rainy winter, digging into the work of project development and nonprofit management.

To prepare for their trip to Puerto Rico, the small group of undergrads—which included business majors Francheska Pokora and Brian Walsh and environmental science major Roslynne Ravy—met each week for a Pitt Business class where they learned the fundamentals of service learning, consulting, team management, and the principles of cultural competency.

They also began developing the scope of their work for Caras, which would involve far more than pulling weeds and planting trees once on the island. Rather, they spent the semester serving as consultants, aids in helping to get the laboratory project off the ground in real and tangible ways.

Over the weeks, they calculated and analyzed expenditures for the laboratory. They projected costs for creating guest lodging. They identified the project’s essential marketing. And they learned more about the wetlands themselves with help from lectures by Pitt environmental science professors Kyle Whittinghill and Danielle Andrews-Brown. The professors traveled to Puerto Rico with the students, advising on the high-caliber equipment needed for the lab and helping the students and Caras leaders assess how local industrialization, pollution, and nearby power plants impact the mangroves and the lab project.

The class is part of Pitt Business’s spring-break Global Service Learning program, which was launched three years ago to give students what former Pitt Business Associate Dean Audrey J. Murrell calls “global competence.” She says that when students communicate across cultures and are involved in on-the-ground decision-making, they learn agile, transferable business skills that are so important in today’s internationally connected society.

The program has already left footprints in two other locales. Students travel to the Bolivian city of Cochabamba, where they are helping to develop a plan to turn the South American region’s artwork into greeting cards for a nonprofit that aids special-needs children. And in Matelot, a village located on the north coast of the Caribbean island of Trinidad, students are assisting a women’s community group in building an ecotourism enterprise. Sending college students abroad for service isn’t new. What is innovative about the Pitt Business program is its long-term commitment to global partners, which cultivates year-round relationships of learning, listening, and preparing subsequent classes to build on the ideas and collaboration of preceding classes.

What the school didn’t want, says Murrell, recently appointed as acting dean of the University Honors College, is “edu-tourism.” “We didn’t want our students just going and getting an experience for themselves, with no lasting impact for the partner.”

Too often, she says, students go somewhere and do something like build a well, then leave without knowing whether it will keep providing water or be maintained. “We didn’t want to do that.”

So, for each of the three sites, Pitt Business has a minimum 10-year commitment.

“It’s an ethics-based, we-centered approach,” explains Schultz, who co-taught the 2019 spring-break preparatory class with Murrell.  “We look at producing rewards for our partner and not just for the student. It’s about how we empower the organization.”

The projects also align with Pitt Business’s motto: From the classroom, to the city, to the world. It’s experiential learning—taking classroom discovery and applying it to projects around the world.

“When you’re out there, and you’re standing face-to-face with the stakeholder, and you’re looking at the wetlands, and you’re hearing from people who’ve gone 14 months without electricity, it’s no longer a theory,” Murrell says. “Immediately, you get a realism that can’t come from reading a book. That’s experiential learning. It’s no longer a paper case.”

There are more people in the room than the group expected. The Pitt students, standing at the front of the airy Caras-owned classroom, look out at the friendly faces of community members who have come from nearby neighborhoods to hear what the visitors have to say. Suddenly, Conville feels a little nervous.

“Hola,” he says to the group. “Gracias por su hospitalidad.” Thank you for your hospitality.

Throughout their week in Puerto Rico, Conville and the others are immersed in the work of Caras, learning more about the nonprofit’s day-to-day efforts and even helping to paint and improve the laboratory building. But they also get a lesson in the language of community. The Caras employees and volunteers and local townspeople are fluent in the practice of mutual aid and shared responsibility. When the students first arrived, they were greeted warmly, as if they were family. Daily, local residents cook them flavorful rice and meat dishes. They pull vines with them in the wetlands. The boots they wear in the mangroves belong to the community; they hang there to be used by whoever comes to work.

Now, as the Pitt group’s visit comes to an end, it’s time for the students to share news of what they have accomplished and what is still to come through Pitt Business’s long-term commitment to the area. They hadn’t anticipated that so many of their nuevos amigos would show up to listen to the presentation.

Working with a translator, Conville and his classmates talk about their semester’s worth of work. They explain their business analyses, which detail how to create a field outpost for research and education and attract scientists interested in studying urban wetlands. They address local concerns about how to best preserve the mangrove forest and talk about enabling Caras con Causa’s plans for after-school science programs for the community’s children.

When the Pitt Business students finish speaking, the assembly applauds. It’s clear to all that there are more good works on the horizon.

Through the ongoing association with Pitt in the years to come, the project in Puerto Rico will delve further into a variety of business concerns, such as establishing a pricing model for use of the outpost, marketing the facility, and securing philanthropic grants, while continuing to engage with the community so the project stays meaningful and useful from a social justice perspective.

With such a breadth of activity, it’s inevitable, Murrell says, that when the students return to campus, they have an “aha” moment—having experienced the life-changing power of business knowledge, fortified through collaboration across cultures.

That is certainly true for Conville. Back in Pittsburgh, he’s energized and inspired. Before the service-learning class, he thought he would be content after graduation to sit in a plush office interacting with a computer.

Now, he wants a business career that is service based, involves people helping people, and effects tangible change.

The change of heart, he says, stems from traveling to a little green corner of the world, teaming up with local residents, and leaving the place a little more hopeful than when he arrived.

The collaboration has changed the nonprofit, too. A Puerto Rican bank recently awarded the nonprofit the grand prize in a big idea challenge—$600,000 to go toward growing the laboratory project. Why? It was impressed with Caras’s social innovation—including its partnership with Pitt—to strengthen society through an initiative that promotes scientific research, environmental conservation, and community empowerment.

When the mighty mangroves are healthy and protected, the neighborhoods growing around them are, too—a lesson this spring’s service-learning students are poised to find out for themselves.