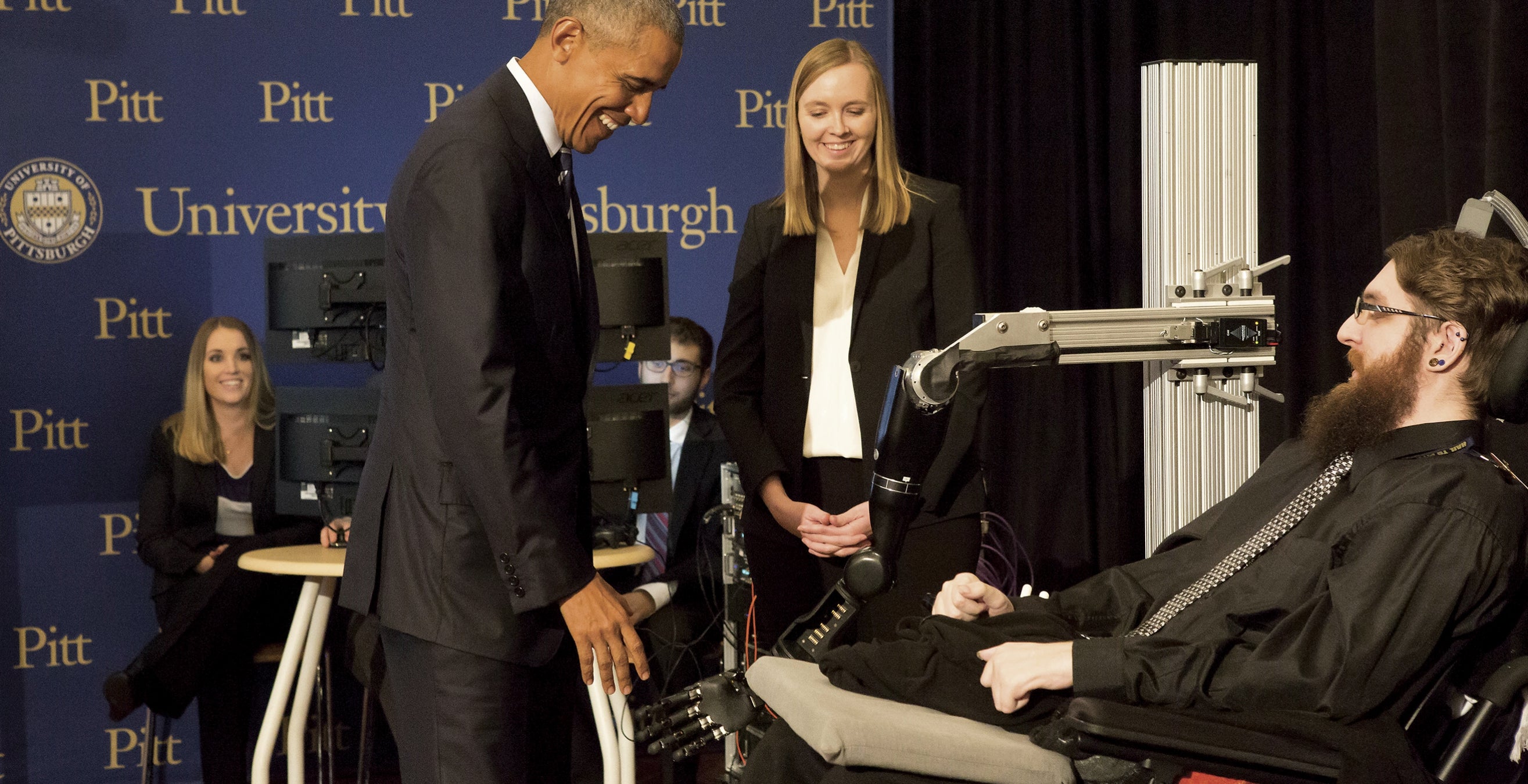 Nathan Copeland’s hands are curled into tight fists, always. They’ve been that way for a dozen years, the result of paralysis from a car accident that left him without sensation below the neck. Recently, though, he was able to grasp, touch, and feel without moving a muscle. Instead, he used his own thoughts to control the movement of a robotic arm. He is the first person in human history to experience the sensation of touch in this extraordinary way, through a brain-computer interface, or BCI.The 30-year-old is participating in groundbreaking research by Pitt scientists and engineers, who developed the BCI. Microelectrodes, strategically implanted in his brain, use electrical stimulation to direct thought-controlled movement of a carbon-fiber arm.

On campus in October, Copeland was able to shake President Barack Obama’s hand and even give him a fist bump by mind-maneuvering the robotic arm.

This remarkable feat was just one of dozens of examples of innovation on display as part of the October 13 Frontiers Conference—an event sponsored by the White House and hosted by Pitt and Carnegie Mellon University to highlight advances in science and technology across the globe. Guests included not only the U.S. president but also Pennsylvania Governor Tom Wolf, NIH Director Francis Collins, NASA Chief Scientist Ellen Stofan, and Virgin Galactic CEO George Whitesides.

The exhibits in Alumni Hall’s Connolly Ballroom that day elicited the excitement generated by a U.S. presidential visit, the buzz of discovery around a science expo, and the vibe of a day full of spirited TED Talks. The U.S. president, accompanied by Pitt Chancellor Patrick Gallagher, met Nathan Copeland and learned more about BCI and the robotic arm. He also docked a spacecraft to the International Space Station, from the virtual cockpit of a Boeing simulator.

In one corner of the exhibition space, a drone created to inspect infrastructure from the air whizzed behind a black-netted barrier. An eerie snake robot, able to reach remote and confined places, slithered around the hardwood floor next to a creeping spider robot designed to navigate rough terrain. Other exhibits featured a virtual trip to Mars, low-cost paper microscopes, robotic wheelchairs that easily climb curbs—and eventually stairs—and even a project in which video-gamers are helping to map the brain’s uncharted neural circuits.

Elsewhere in Pitt’s Alumni Hall, as well as blocks away at Carnegie Mellon, scientists from other universities and companies worldwide met to share perspectives on the frontiers in science and technology in five tracks—personal, local, national, global, and interplanetary. How might emerging innovation improve our personal lives, our neighborhoods, our nation, our world, and beyond?

The tracks presented a whirlwind of information, each packed with blockbuster speakers and insights. Tim Hughes of SpaceX, a private aerospace company, shared big ideas for living on Mars, prompted by the ambitious goal to send an American there by 2030; Roman Mars, host of popular radio program 99% Invisible, recorded a live podcast with Stanford University economist Raj Chetty on inequality in America; media guru Tim O’Reilly delivered a hopeful message about how machines and automation might enhance—rather than overtake—human jobs and work; and there was discussion about Pitt’s leading role in making health care more personalized by using customized therapies and preventive strategies based on an individual’s own lifestyle, environment, and genetics. The University of Pittsburgh recently received a $46 million, five-year grant from the National Institutes of Health for a landmark research effort that will recruit enrollees for a new precision medicine initiative. The national All of Us Research Program is being compared in scope to the worldwide genome project with its goal to identify and map all human genes. Led by the Clinical and Translational Science Institute’s Steven Reis, the “All of Us” Pitt team plans to recruit 175,000 people as part of the national endeavor to customize health prevention and treatment based on individual differences in lifestyle habits, environmental factors, and biogenetics. The goal nationwide is one million enrollees by 2020. In more good news, the day of the conference, the White House announced a $300 million commitment to national research on these frontiers, including $70 million for brain research and $16 million to expand the precision medicine initiative.

A highlight of the day’s events was an afternoon plenary session, at which President Obama gave the keynote address and participated in a panel discussion on the future of medicine moderated by surgeon and health-policy explorer Atul Gawande, who is also a New Yorker staff writer and author of the book Being Mortal, among others. The president was introduced by Alexis Chidi, a young woman who exemplifies the conference’s values and promise. She is a Pitt alumnus who enrolled here at age 16 to study psychology and economics. She earned a doctoral degree in the spring from the joint Pitt and Carnegie Mellon MD-PhD physician-scientist program, and she will complete medical school at Pitt in 2017.

“As a product of the collaborative, innovative, multidisciplinary tradition here in Pittsburgh, I cannot imagine a better place to hold this important national forum,” Chidi said.

In his remarks to open the plenary session, Pitt Chancellor Patrick Gallagher captured the spirit of the event: “Today, we are building a world where we will restore sight to blind eyes and sensation to paralyzed limbs. We are realizing a future where we will send people to Mars, grow a human organ on a chip, fill our streets with self-driving cars, and diagnose cancer from a single drop of blood.”

Much of that work is happening here and now on the University of Pittsburgh’s campus. We can all fist-bump to that.

One Pitt history professor's research shows that wealth is more than money.

For Evens Augustin, it's all about the heart.