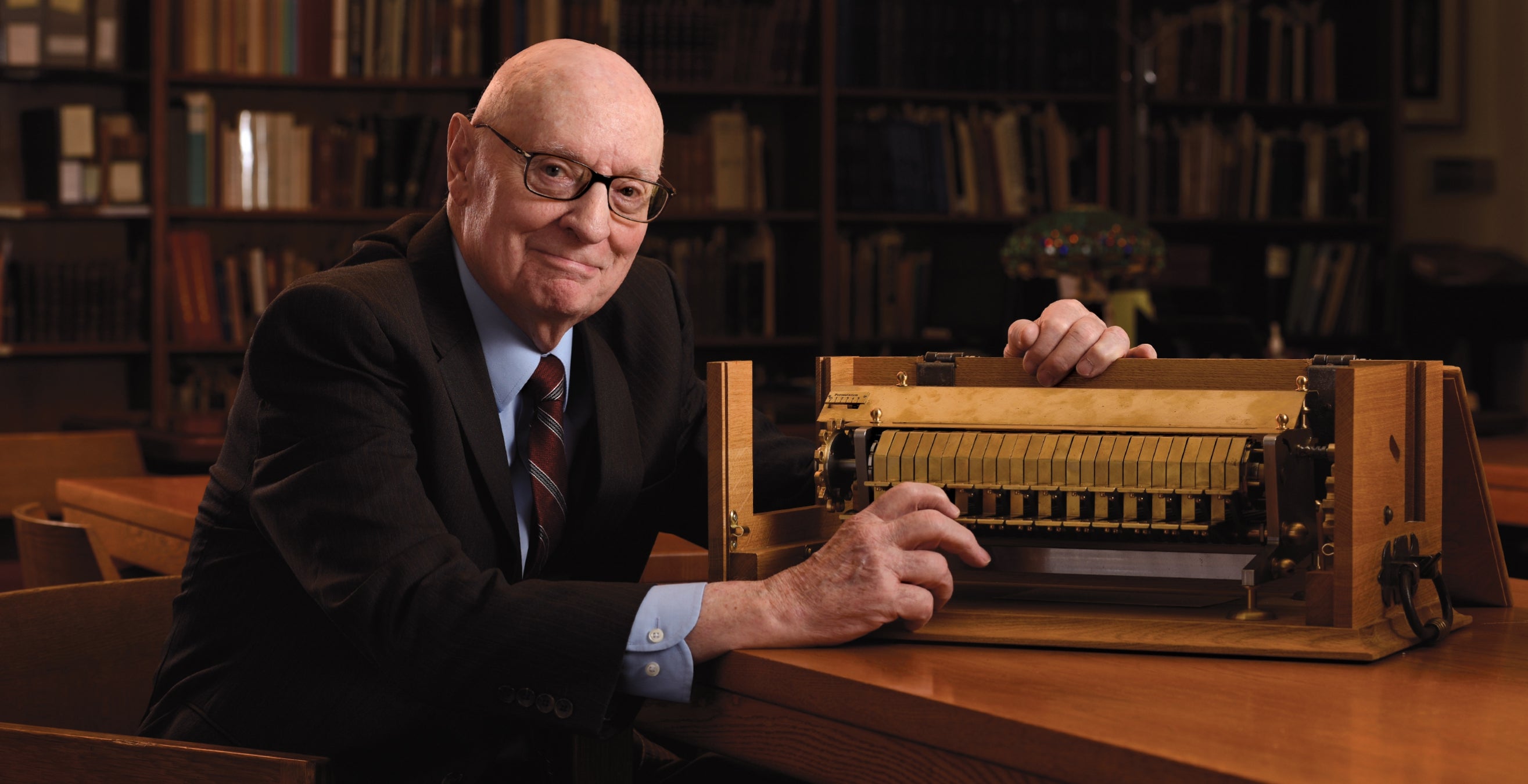 The 16-year-old was already a standout in math when he discovered Will Durant’s book, The Story of Philosophy. It was an engaging read, and it would influence the rest of his life. The teen had spent his childhood in Hagen, Germany, in the Rhine-Ruhr region, but eventually immigrated with his family to New York, after his father’s law practice declined as the Nazis rose to power in the 1930s. He entered New York’s public school system not understanding a word of spoken English, but he quickly learned to read it. Books became a way to catch up and then excel.

“I was a bookworm,” recalls Nicholas Rescher about his boyhood. “When I grew up, the term ‘nerd’ didn’t exist.”

As an undergraduate at Queens College (now part of the City University of New York), Rescher couldn’t decide whether to study philosophy or math, so he majored in both. Then, the summer before entering Princeton for graduate school, he began reading about 17th-century mathematician and philosopher Gottfried Wilhelm Leibniz, who had wide-ranging interests, including mathematics, philosophy, ethics, theology, and even statesmanship. Rescher became so intrigued that he decided to focus his PhD dissertation on the German philosopher. Even now, he views Leibniz as the ideal philosopher and scholar.

“Leibniz had remarkable creativity across a broad frontier, yet he had a kind of integrated vision of what the life of the mind should be,” says Rescher, now a Distinguished University Professor of Philosophy at Pitt. “I like the idea that there has to be some concern for the big picture and how things fit together.”

Rescher says that modern philosophy has become nearly unreadable because it amounts to fellow specialists talking to one another in their own specialized language. Instead, he says, “The idea of having a philosophical system, which died out a long time ago—and which seeks to give a comprehensive overview of philosophical issues in a way that clarifies their connections and interrelationships—is still something that is alive in my thought and work.”

It’s not surprising, then, that the Pitt philosopher has a longtime fascination with Leibniz. Not long ago, Rescher did something remarkable, reaching back across time to enter the mind of the 17th-century philosopher and resurrect one of his groundbreaking inventions. In 2010, during his habitual reading, Rescher discovered a memorandum that Leibniz had written to Leopold I, the Holy Roman Emperor, in 1688. It touted secret inventions that could “bring about a revolutionary change in military affairs, should they be known and used by one single power before being discovered by others.” Leibniz was describing his machina deciphratoria, a coding and decoding apparatus, which Rescher has since characterized as “the world’s first cryptographic machine.”

The 1688 memorandum included detailed notes on the proposed device, because Leibniz was seeking to convince the emperor to fund the project. But the emperor wasn’t interested, and the philosopher’s machine wasn’t built—until Rescher did so in 2012.

He enlisted the help of Richard Kotler, a retired Pittsburgh engineer, as well as Klaus Badur and Wolfgang Rottstedt, German machinists specializing in historical recreations. They also drew upon their knowledge of Leibniz’s calculating machine, which Rescher describes as “an arithmetical machine that was—and still is—one of the wonders of the world of geared engineering.” Central to the calculator’s operation is a stepped-drum mechanism known as the “Leibniz Wheel,” which is also a key feature in his cipher machine.

For the inaugural exhibition of the machina deciphratoria, Rescher wrote Leibniz and Cryptography, An Account . . . of the Reconstruction of Leibniz’s Cipher Machine, in which he includes Leibniz’s description of the machine: “It is a smallish device that is easy to transport. With it a great ruler can concurrently use many virtually unsolvable ciphers and correspond with many ministers . . . enabling one to get at the requisite ciphers or alphabetic-letters as easily as though one were playing on a clavichord or other [keyboard] instrument.”

“The operator did not have to fiddle with wheels or slats: the apparatus worked in a fully automatic way that combined convenience of operation with reasonable cryptographic security,” Rescher revealed in his account.  Remarkably, no comparable cryptographic device appeared until the era of World War I, and some of those that emerged used principles first devised by Leibniz.

“In the cleverness of its conceptualization and sophistication of its operation . . . [it] was some 250 years ahead of its time,” wrote Rescher.

In an age of specialization, when scholars tend to carve out original ideas by exploring more narrow and remote realms of thought, it’s unusual to find a philosopher who embraces the role of “generalist.” But Rescher relishes the freedom to delve into subject after subject. He tackles everything from historical to modern philosophy, from theoretical to applied topics, from children’s fables to undergraduate textbooks.

Likewise, says Rescher, “Leibniz was a remarkable generalist. I think philosophy exists, in part, to put things together and to give a connected view of how the creative effort of understanding is supposed to work itself out. And it’s supposed to provide some sort of counterweight to the specialization and division of labor that separates us from our colleagues.”

One way that Rescher exemplifies this broad creative approach is through his own wide-ranging curiosity. His book titles reference the nature of truth, unselfishness, technological progress, religion, autobiography, philosophical anthropology, social issues, fairness, free will, and common sense.

And, the breadth of his knowledge isn’t limited to philosophy. In 1994, Rescher authored a children’s book of fables called Animal Conversations, a project he undertook when his now-grown children were young. He writes about historical issues, including a booklet on Confederate refugees in Canada after the Civil War. The University of Pittsburgh Press is publishing his book on the theory of reports and reporting as it relates to World War II espionage.

In June of 2016, Rescher received the prestigious Helmholtz Medal, which is bestowed by the German Academy of Sciences for outstanding lifetime contributions to scholarship. The award presentation noted that Rescher “unquestionably ranks among the most prominent philosophers of our time,” and praised him as “a bridge builder who systemically connects various philosophical traditions.”

Those accolades are a tribute to Rescher’s deep devotion to philosophy. After earning his doctoral degree at age 22, becoming the youngest PhD graduate on record at Princeton, Rescher served in the U.S. Marine Corps during the Korean War. Returning home, he was ready to give his mind a rigorous workout. He joined the Rand Corporation’s mathematics division and later became a philosophy professor at Lehigh University.

In 1961 he joined the Pitt faculty and helped to transform its philosophy program into one of the best anywhere. This spring, the University of Pittsburgh was pegged as the world’s top university for philosophy, according to the 2016 QS World University Rankings. During his Pitt career, Rescher rose through the faculty ranks and served as chair of the Department of Philosophy and as director and, later, chair of the Center for Philosophy of Science, a position he has held since 1988. He has also directed nearly 20 graduate students as they acquired PhDs.

And, if being a generalist harkens back to another era, so does Rescher’s habit of writing everything by hand. Each day, he fills a page or more with his expansive thoughts in his squiggly cursive, a habit that has produced 100 books over six decades, as well as hundreds of scholarly journal articles. His assistant, Estelle Burris, decodes what she fondly calls his “chicken scrawl” and then transcribes it into one typed document after another. His thoughts are jotted down in hotel rooms, on airplanes, at home—whenever and wherever inspiration strikes.

“I don’t feel I’ve got something straight until I’ve put it on paper,” notes Rescher. “So, that explains a lot of books.”

He says it matter-of-factly, as though it were no big feat to write enough books to fill an entire bookshelf, not to mention the 14 books, translated into five languages, that have been written about his work by other authors. In fact, many of his books have been issued by the University of Pittsburgh Press, a publisher he characterizes as “admirably competent and professional.”

His colleague Robert Brandom, another world-leading Pitt philosopher, admires Rescher’s enduring enthusiasm for his work. “He has been in Pittsburgh for 55 years. One would think it would be a chore after all these years. But whatever he works on is like a playground for him. It’s like ‘What would it be like to go down that slide?’ There is joy and playfulness.”

Play actually has an active role in Rescher’s life. He is a contract bridge enthusiast who savors the card game in various competitions. He also enjoys a lively family life, and describes his wife, Dorothy, as “the mainstay of my psychic and physical well-being.”

Play, it seems, also leads to mastery. Rescher’s accolades include eight honorary degrees from universities on three continents; fellowships from the Ford, Guggenheim, and National Science Foundations; and awards including the Alexander von Humboldt Prize for Humanistic Scholarship, the Belgian Prix Mercier, and the Medal of Merit of the Federal Republic of Germany. He also served as founding editor of the American Philosophical Quarterly for 30 years.

Flashing his boyish smile, Rescher explains his stellar career quite simply: “In a sense, I never decided what I would be when I grow up.”  He’s still exploring the possibilities.

This story appears in the Summer 2016 issue of Pitt Magazine.

Pitt grads pass on the drive to serve.

What is ... the University of Pittsburgh! 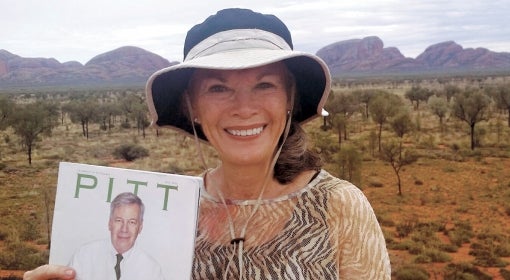